Comments - Fantastic, rare oban format Osaka triptych depicting a scene from the life of samurai Minamoto no Yoshitsune. Facing an attack by warrior monks, Yoshitsune's brave retainer Sato Tadanobu disguised himself in his master's armor to allow him to escape. Perched on the verandah of a temple at right, the warrior monk Yokogawa Kakuhan grips a spear with both hands, ready to strike his enemy. In the center, Tadanobu glares back at him, his sword in hand. He wears a fine suit of armor over a purple kimono, and a helmet topped with a small lion figurine. At left, Yoshitsune's mistress, Shizuka gozen lifts her hat for a closer look, a strange smile on her face. she wears a straw raincoat over a purple kimono patterned with blossoms. Snow falls heavily through the night sky. A striking composition, beautifully colored and detailed with embossing on the samurai's armor and sword hilts, lacquer on the black areas of the monk's armor and the spear handle, and accents of metallic pigment that have oxidized to a dark tone.

Condition - This print with excellent color and detail as shown. Three separate panels. A few creases at edges, faint stain on face from offsetting of metallic pigment. Please see photos for details. 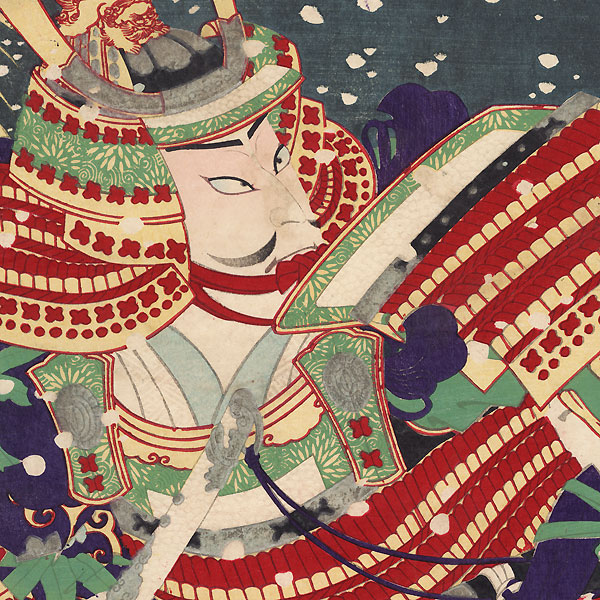 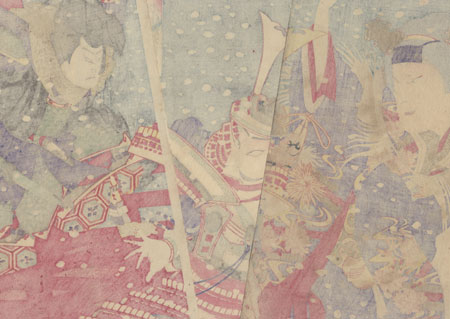