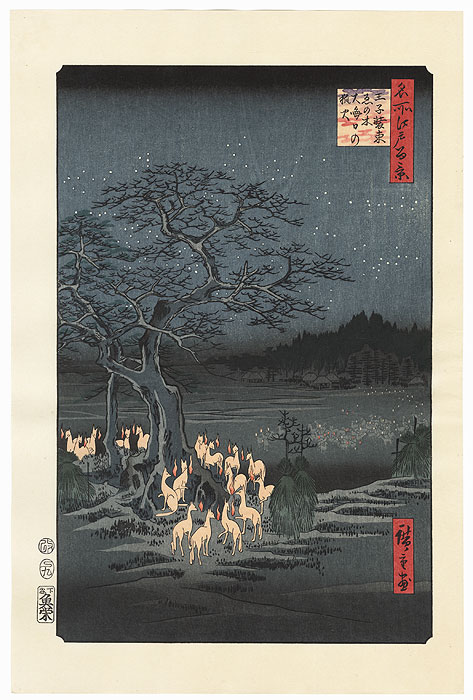 Yamada Shoin's Selected Famous Views of Edo - Around 1965, the Tokyo publisher Yamada Shoin released a reprint series of sixty selected designs from Hiroshige's "One Hundred Famous Views of Edo." This beautifully printed series includes iconic images such as pedestrians caught in a thunderstorm in "Sudden Shower over Shin-Ohashi Bridge and Atake," an eagle soaring high above the plains in "Fukagawa Susaki and Jumantsubo," and the beautiful blossoms of "Horikiri Iris Garden" and "Plum Estate, Kameido."

Drawing on the traditions and methods of the Edo era, the skilled artisans of Yamada Shoin carefully carved and printed new blocks to beautifully recreate Hiroshige's most memorable designs from the series. Printed to exacting standards with clear, vibrant color and fine bokashi shading, these lovely reprints faithfully capture the beauty of Hiroshige's originals.

While reprints of Hiroshige's "Tokaido" series were done by many different publishers, it's much harder to find reprints of his "One Hundred Famous Views of Edo," especially nicely done ones such as these. This is a great opportunity to put together a few high quality "Hundred Edo" reprints if you are looking for this series.

New Year's Eve Foxfires at the Changing Tree, Oji - One of the most evocative Japanese woodblock prints of all time and a Hiroshige masterwork, this incredible image depicts the legend of foxes gathering around a tree near Oji Inari Shrine on New Year's Eve. There, they would change into clothes before paying a visit to the shrine, where they would receive directions for the coming year from the Shinto deity Inari. In Japanese folklore, foxes were considered magical creatures with special abilities, including shape-shifting, and were often mischievous pranksters. Here, the foxes meet at the base of the tree, breathing out magical foxfires, the red orange flames flickering around them. Dozens of foxes can be seen approaching in the distance, the fields dotted with orange flames beneath a sky filled with twinkling stars. A fantastic Hiroshige design, considered one of the best of the series, with fine bokashi shading in the night sky. 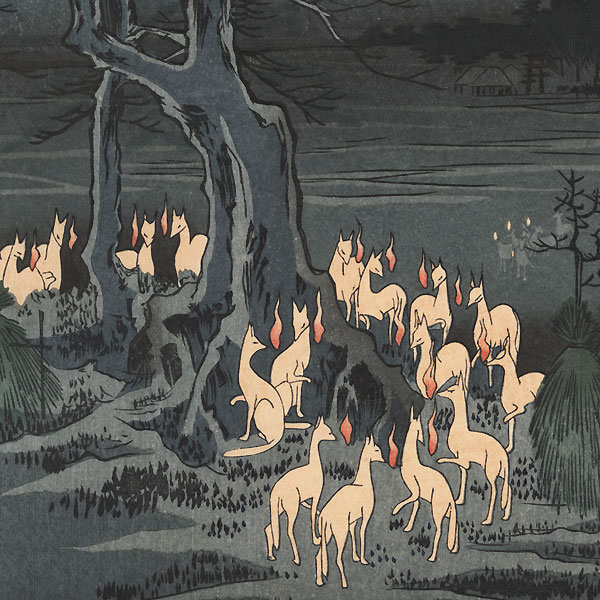 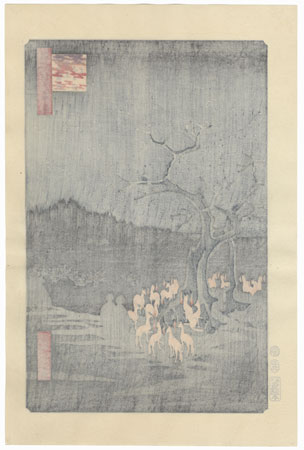