One Day in East Africa No. 7

Toshi Yoshida - Toshi Yoshida was the son of Hiroshi Yoshida, one of the most famous woodblock print artists of the twentieth century. He followed the family tradition and centuries-old Japanese craft of woodblock printmaking, adopting and developing his signature style. His close relationship with his father was instrumental in the pursuit of his art. Together, father and son traveled Japan and the globe, examining and sketching the people and places around them.

Although Yoshida's prints span a wide range of subjects, he is most well known for his lovely portrayals of everyday life in Japan and the beautiful countryside. His works often include the human element, adding a sense of scale and a personal quality to his remarkable landscapes. Softly colored and masterfully composed, Toshi Yoshida's evocative woodblock prints capture the beauty of Japan in his own unique style.

From the Yoshida Family Archives - This print comes from a group of Toshi Yoshida woodblocks we recently acquired from the Yoshida family. The stock comes directly from the Yoshida archives, and includes some rare designs not commonly seen on the market. Since these prints were not originally intended for sale, some are lacking a printed title or other information in the margins. A great opportunity to acquire a classic Toshi Yoshida design with an interesting provenance.

Toshi Yoshida's African Animals - During the 1980s, Toshi Yoshida's travels in Africa inspired him to create many woodblock prints of the animals he saw there, including lions, tigers, zebras, and elephants. He was drawn to African wildlife, and in 1989, Toshi Yoshida even wrote and illustrated two children's books titled "Young Lions" and "Elephant Crossing." His animal prints are beautifully drawn and exquisitely detailed, using incredibly fine line work to create the textures of fur, hide, and grass. The skies and grounds often include fine bokashi shading with soft gradations of color. These wonderful prints capture the character of each animal, demonstrating Toshi Yoshida's love for the natural world and his perceptive recording of it. These handsome designs showcase a different side of Toshi Yoshida's artistic talent.

Comments - Fantastic, large format print of animals galloping across the dry grass plains, perhaps fleeing from a predator. The animals streak past in a blur of motion rendered by parallel lines, with the lines wavering along the path where the animals are. The tall umbrella thorn trees along the horizon and the sky are treated the same manner, heightening the feeling of motion. The first time we've offered this terrific design. 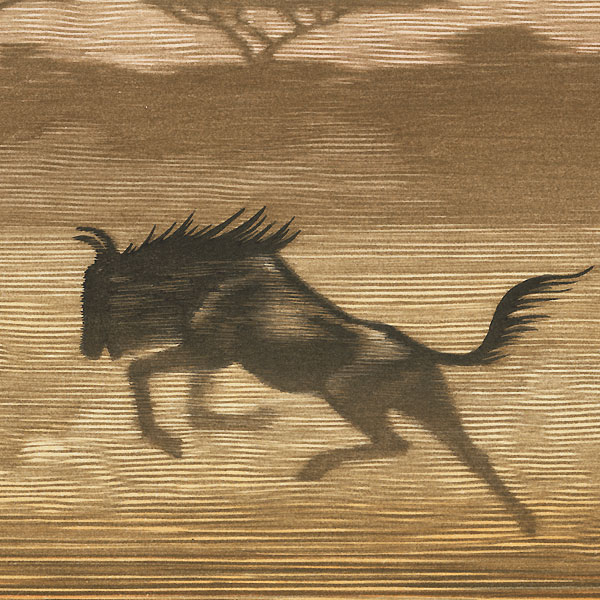 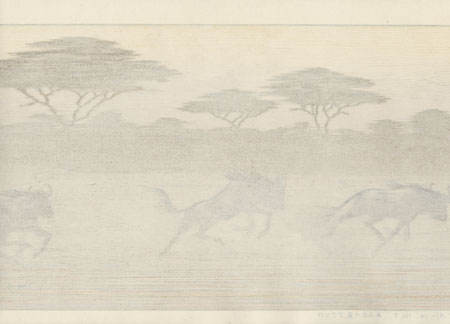